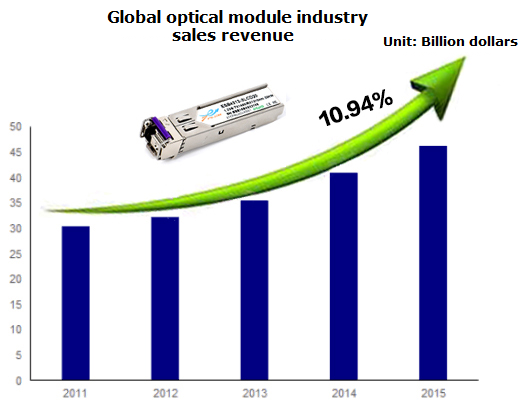 Shaking, the core technology is in the hands of Japanese companies and American companies. In recent years, the scale of my country’s optical communication device market has kept pace with the global growth, and the domestic optical communication device market accounts for about 25%-30% of the global market share. However, domestic optical modules are mainly concentrated in the low-end and module components of the industrial chain, and the high-end module market and chip market are less involved, and there is a lot of room for growth. In the field of upstream optical chips and optical devices, mainly U.S. and Japanese companies are monopolized, and domestic chips are concentrated in products below 10G; downstream system integrators have greater advantages in my country.

my country’s optical modules and optical chips occupy the vast majority of shares in 10G and below, but are obviously weak in 25G and above. At present, most of the manufacturers in my country are based on low-end products, the homogenization competition is serious, the profit level is relatively meager, and it is difficult to invest more funds in the research and development of high-end products. In this regard, the Ministry of Industry and Information Technology proposed to adjust the industrial structure and cultivate industry leaders. The goal is that the localization rate of low-end optoelectronic chips will exceed 60% in 2022, and the localization rate of high-end optoelectronic chips will exceed 20%; there are 2-3 domestic companies in the market. Enter the top ten in the global market. country

The support of the domestic policy is beneficial to the first-line enterprises in the domestic optical module industry, and it will provide convenience in financing channels, tax incentives, talent introduction, etc., and optimistic about the relevant target companies, such as the only optical module in the world’s top ten Zhongji Innolight; a few domestic companies can Eosun, which mass-produces 100G/200G optical modules. Since 2019, the market has been looking forward to the bulk purchase of 400G optical modules for data centers, but until the outbreak of the new crown epidemic, the market demand did not continue to grow rapidly. The outbreak of the new crown epidemic has affected the normal operation of the optical communication industry chain. Now China is actively resuming work and production after the epidemic, and various optical module manufacturers are also releasing information on products, production capacity and market expectations. The demand for optical modules in the data center market began with Google’s purchase of 10GSFP+ in 2007, and in 2012, the market began to supply 40GQSFP+ optical modules, and in 2016

The annual demand for 40G modules reached its peak, with more than 3 million units sold that year, 78% of which were given to data centers. In 2016, North American data centers began to upgrade and replace 100GQSFP28 optical modules, and the shipment in 2017 reached 3 million. In 2018, the purchase of 100G optical modules by major data center operators will double or even triple the level in 2017. In 2019, 100G transceivers will be upgraded to 400G. Hyperscale data center network bandwidth requirements are almost

Are You Looking Trigonometry Assignment Help

6 Ways To Prepare For Your Birmingham 10k Run

A low-cost way to get your appliances fixed in Saskatoon!

Trapped in a Sim: Might Become Leon’s Most Vital Ally Yet

9 Advantages of Preschool that Every Parent Should Know

What skills do you need for video production?

How to Get Services of License Plate Lookup